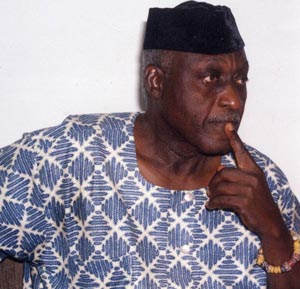 Historian Professor Kofi Anyidoho says the celebrated poet and politician, Professor Kofi Awoonor who died in a terrorist attack in Kenya was an ancestral warlord who died on the battle field.

The spokesperson for the Awoonor family was explaining why the slain former Chairman of the Council of State was born with a scar on his forehead.

He was speaking at a short ceremony at the Kotoka International Airport, Accra, to receive the mortal remains of Professor Kofi Awoonor. It was attended by politicians, friends and family members.

Professor Kofi Anyidoho revealed that close associates of the late former chair of the Council of State would notice this scar.

The Professor of Literature at the University of Ghana said elders of the family enquired from their ancestors which of them was reborn as Kofi Awoonor.

The elders were told Kofi Awoonor, was "a brave man who had died in battle" and suggested the scar was a sign of that ancestor, he said.

Prof. Anyidoho also revealed "no more than 250 people" will be attending a private funeral for the late Awoonor.

"I will be difficult" he said but that was his wish.

Nonetheless, a public state event will be organised on Friday 11 October 2013 to allow members of the public to pay tribute to Professor Awoonor.

Professor Kofi Awoonor was among 62 others who were killed in the September 2013 attack on the Westgate Shopping Mall in Nairobi, Kenya.

The well-known poet started writing under the name George Awoonor-Williams.

Oops, you forgot something.

The words you entered did not match the given text. Please try again.

Reply JamosKneen
1:06 AM on June 14, 2021
You've made the point.
https://ouressays.com/
admission essay services
https://scoringessays.com/
essay writing service best
https://topessaywritinglist.com/
can someone write my essay
https://paperwritingservicestops.com/
how to write an essay conclusion
https://tjcmusic.webs.com/apps/guestbook/